As weeks pass by, students anxiously wait for the internet to become faster and more reliable on campus. In the last issue, head of the information technology department, Shahryar Heydari, said that he and his team were currently working on improving the Internet and increasing the speed and bandwidth. As students wait, there is one more issue to add: viruses.

Residents received an email two weeks ago from President James Mellichamp about viruses on students’ personal computers. In the email, Mellichamp said, “It has been brought to my attention that the disruption of service was caused by viruses present on personal computers owned by students.”

Mellichamp also stated in the email that students should make sure their computers and other personal technology are updated with the latest virus protection software so that service interruptions can be minimized.

However, students expressed that they are now confused about how viruses can be the main problem for the Internet interruptions on campus and in the dorms.

“I don’t see, personally, how a few viruses on a few people’s laptops can affect the entire Wi-Fi,” said sophomore music major Leah Mooney. “It seems kind of phony.”

Heydari said via email that he and his team “referred to our firewall even logs, which showed us the computers that were infected” and gave no further word on the matter.

The Navigator contacted two different IT departments who were willing to talk about bandwidth and speed on their college campuses.

“It could be true that viruses are interrupting your service,” said Hollis Towsend, Network Administrator at Young Harris College. “At Young Harris, it is a requirement for the students to have the updated anti-virus software. We ban people using music sharing websites because it can take up all of the bandwidth.”

Townsend explained that a small number of students all watching high definition television at the same time on their computers can use up a lot of space on a campus’ network.

“One or two people using torrent websites can eat up all of the bandwidth,” Townsend said.

The Navigator also talked to John Douglas, acting director of IT at Truett-McConnell College.  He has worked there for five years.

Douglas explained that all data has to go through a firewall, and it is possible that the firewall cannot handle all of the students’ data coming through.

“Usually a virus affects a person’s laptop because it is trying to spy on you, but for it to affect a whole campus’ Internet speed is unheard of to me,” he said.

Douglas said that Truett-McConnell has two high speed providers, one of which is Windstream, like Piedmont.  One of the companies provides 100mbps and the other 50mbps. “We’re using one of the providers as a backup,” said Douglas.

“Sometimes the school’s bandwidth is not big enough to handle all of the stuff coming through,” said Douglas. “Students sometimes have a lot of spyware on their computers that can really slow it down, but I don’t think that necessarily means you all have viruses.”

Douglas went on to explain that simply cleaning up your computer’s hardware can help speed up your Internet.

“But if your computer runs clean after that sweep, then it is something else that is messing with your Internet,” he said. 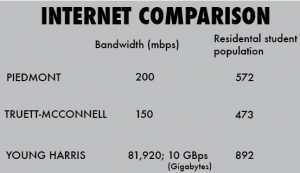