The Spirit of Piedmont A look at the history of PC 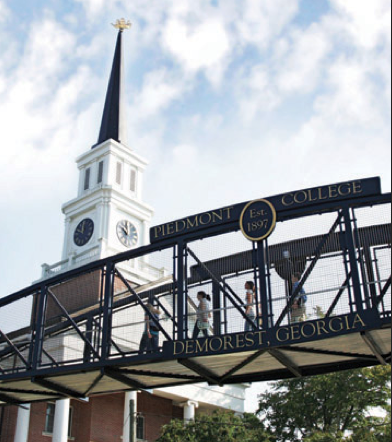 Piedmont College has almost always been a patchwork of buildings purchased from the community.
Many of these historic buildings are no longer here, but it’s not because of the swipe of the bulldozer’s plow.
The harsh and sometimes mysterious flame removed these buildings.
The first building owned by the campus to feel the lick of fire was Demorest Hall, also known as “The Big Schoolhouse on the Hill.”
This took place during normal school hours in 1911.
“The only casualties were the scratches from the rosebush,” said confounder Willam F. Chrisler.
In 1911, a fire ripped through the school library, which was falling into disrepair before the fire.
A few years went by with the campus remaining quiet until a fire ripped through the Mary J. Green Hall, which at the time housed the younger girls.
This fire is the only one to have directly claimed a life.
15-year-old Florence Weeks died when she either jumped or fell from an upper story window to escape the flames.
In 1914, Piedmont constructed an auditorium in the area between the current Getman-Babcock Hall and the Lane Student Center. This building began to be called Chautauqua Hall for the Chautauqua programs held there for a short while.
The building was eventually converted into a warehouse and, in its dilapidated state, was the perfect target for a fire. This fire occured on Oct. 12, 1957, and indirectly claimed the life of Dean Scott, who suffered a heart attack while dressing to assist the firefighters.
The J.S. Green building, which housed the college offices and bookstore, was burned in 1963.
In February of 1969, the Commons Hall, which operated as the campus dining hall and kitchen, was destroyed in a fire. A temporary dining hall was constructed in the corrugated warehouse behind Commons Hall until Nielsen Dining Hall was completed.
The most recent building to burn on campus was Patten Hall in 1998, which served the college for over 50 years.
“Looking back at the history of Piedmont’s buildings, one cannot but be struck by the fact that the ‘accidental’ burning of some of the old buildings was a powerful incentive toward new facilities,” said Mary C. Lane in “Centennial History of Piedmont College.”