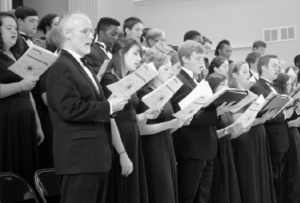 On Aug. 28, students and faculty alike gathered in the chapel for Piedmont’s annual Convocation ceremony.

“Convocation is a chance to honor the freshman class and cement their relationship to the college. It’s the beginning of the new academic year, but for the incoming class, it is beginning of their undergraduate experience,” said Ashley Cleere, Piedmont’s chaplain, who was responsible for planning the event.

Convocation began with the Piedmont faculty in full graduation regalia being led to their seats by Gonfalon Bearer Joshua Schmidt.

“I was honored that the college asked me to do it. I would like to do it again if they asked me,” said Schmidt.

A welcome from President James Mellichamp started the line of speakers and was followed by a call to worship by Cleere.

In her speech, she explained that her hope for this Convocation was to get the freshmen excited about their journey through their undergraduate experience.

“The journey is just beginning for these freshmen, so it is all about setting them on their course and getting them off to a good start,” said Peterson.

He recognized all those in the room who were receiving scholarships from the school.

Cleere said she choose Bunis to speak because he is the assistant minister at Plymouth Church in Brooklyn, N.Y., a church that Piedmont has had a close relationship with. Bunis began by emphasizing that 50 years ago, the March on Washington took place.

This helped set the stage for his unintended theme of coming alive and finding what a student desires to do.

Bunis stressed each student should find what drives them.

He ended with a quote by Malala Yousafzai: “One child, one teacher, one pen and one book can change the world.”

Yousafzai survived an assassination by the Taliban in Pakistan following her fight to get an education for herself and other women.

“I was very honored to do it and represent Piedmont’s senior class,” Hodge said.

Hodge gave the freshmen a few tips about college life. She urged the class to “do more.”

“It was good to hear from an upperclassman about stuff she has already experienced,” Bartlett said.