Behind the scenes of Piedmont’s art museum 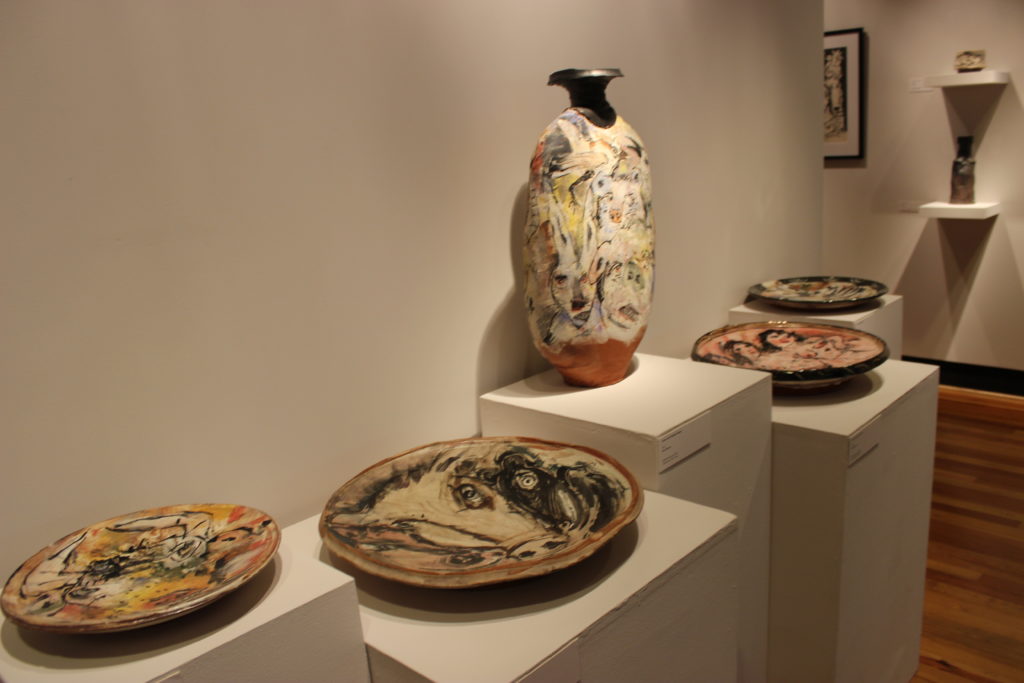 On a sunny Thursday afternoon, Daniel White, director of the Mason-Scharfenstein Museum of Art (MSMA), gets ready to hang the final touch of Ron Meyers’ retrospective ceramic show: a vinyl sign with the artist and show name. After spending the previous day carefully unpacking dozens of small sculptures, White surveys the gallery filled with unique pottery.

“In some ways, running an art museum is kind of like being a theatre director,” said White. “Sometimes it’s real high theatre because you wonder, are people going to show up to the reception? Are people going to like the work?”

Meyers, potter and  former professor of ceramics at the University of Georgia, is among many artists whose work has been featured in the MSMA. His show opened on Aug. 28 and runs until Sept. 30.

Bringing artists to the museum is a lengthy process.

“I meet with the art department first,” said  White. “We all submit proposals, talk about the work and everyone talks about the person they want to pitch. Then [Art Department Chair] Chris Kelly and I go over the proposals and pick who we want to come here.”

The selection of artists for the museum’s gallery shows depends on the faculty’s judgement. “We decide whether shows come here based on what has been shown before and what we feel the students need or should see,” White said.

White explained that the artists are typically colleagues or close friends of the art faculty. According to White, Kelly knows Meyers.

“We heard that Ron was having a retrospective at the Arkansas Art Center in Little Rock, Arkansas,” said White. “We thought that it was a shame that there was no venue scheduled for Georgia. He needs a retrospective in his adopted home state.”

After selecting an artist for a show, White contacts him or her about a year in advance to offer the opportunity. However, the communication doesn’t stop there.

“I call them to see how their work is going and see if there’s any information or imagery that I could use for the show,” said White. “The great thing about my job is building relationships. I like to keep in touch with the artists.”

The museum is usually responsible for getting the work to downtown Demorest.

“Oftentimes, I pick up the work and bring it back,” said White. “That’s a real big selling feature for bringing artists here and that is because Piedmont College has been very courteous in letting me use their 16-passenger vans. When you take the seats out, it turns into an art transfer van.”

Installing the work is the next step of putting together a show at the MSMA. White is generally in charge of setting up the artwork.

“Once the work is here, it’s up to me to decide how to display it,” he said.  “[The artists] can certainly choose what work to send, but once it’s here, we decide how its hung and where it’s placed. A lot of times the artists appreciate that.”

However, White said that there are some exceptions.

“Sheryl Haler and Jessica Wohl came here last year for [their] installation,” he said.  “Installation is a very artist-oriented component [to their work]. They like to set up the space that they personally like to see fit.”

White said that the artists have responded well so far. “The day the artists come to see their work for the first time, it’s stressful because I feel like they won’t like it,” he said. “That first five seconds, they’re taking it in and I am watching them. So far it’s been great.”

The museum employs several student workers to assist with every aspect of setting up a show. For Meyers’ show, they helped White unpack the work onto tables, made labels and will set up the reception.

“[The student workers] do a lot of assisting with putting the shows together,” White said. “It’s really a team effort.”

Freshman art therapy major LeAnne Hilliard is a student worker in the museum.

“I greet people who come in and make sure that the art doesn’t get stolen,” said Hilliard. “The first day I worked, we actually took down a huge [show] with huge paintings. I was pretty scared I was going to break them.”

The museum staff takes special precautions when unpacking and displaying the work.

“Everything is unwrapped carefully, placed on the table and then set out where it needs to go,” said White. “The work is unpacked one or two boxes at a time. You don’t want to get in a big hurry. With ceramics, you have to really have clean hands so you have a good grip. Paintings have more precautions.”

The MSMA is fully funded by Piedmont College, and that includes the shows. White explained that Piedmont pays for the artists’ travel costs, receptions and any extra expenses.

“The college is very supportive of these shows because they feel that these shows need to be seen by students and the community,” said White. “We wouldn’t be anywhere without their support.”