What Suffers, Loves: A review of the theatre department’s moving final play of the season

“J.B.” is a modern re-telling of the story of Job from the Bible that ran in the Black Box Theater from April 11-14. Viewers were treated to an entertaining circus pre-show in the Swanson Center lobby before the show started, contrasting the heart-tugging drama that was to come from the play.

The play was set on a round platform in the middle of the theatre, which allowed the audience to sit in chairs or bleachers surrounding the stage.

Senior theatre majors Jeremy Douylliez and Peter Davis were the first actors to appear on platform as the characters of God and Satan, arguing about the perfect life of J.B.  J.B., played by senior  theatre major Matt McClure, was a man who had everything he ever wanted.

Within a matter of days, and at the behest of Satan, J.B. loses all he ever loved. As a result, McClure’s character screamed at God for taking everything he ever loved away from him in a tear-jerking performance.

Junior theatre major Lily Baxley played J.B.’s wife, Sarah, who leaves J.B. at the time in his life when he felt most defeated.

Only halfway to the play’s intermission, many audience members looked on with somber faces and teary eyes as McClure continued his emotional performance.

Another pivotal moment in the play occurred when Baxley, with tears in her eyes, slowly walked away from J.B., telling him goodbye for what onlookers believed to be the last time.

With impeccable acting from Douylliez, Baxley, McClure and Davis, “J.B.” was an incredible way to finish out the theatre department’s season. The play not only gave insight to those that doubted themselves when they felt all was lost, but it also stressed that never giving up on yourself could possibly save your life. 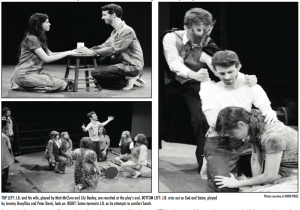